SNA and some other groups have been enforcing a “BID’AH” on the Muslims in N. America, and elsewhere. They know that there is no “Daleel” in the Qur’an or the Sunnah for making it Eid al- Hajj but they argue:

1) Element of place is dominant for Eid al-Adha;

2) Muslim must show unity with Hujjaj;

3) Fast is on the Day of Arafah (determined by the official Saudi Hajj date); and

4) Eid al-Adha is a celebration for completing the rites of Hajj.

No Fiqh ever claimed that Eid al-Adha is really Eid al-Hajj. Muslims always celebrated it to walk in the footsteps of Hadrat Ibrahim (AS).

Ahilla (The Crescent moons) are the Mawaqeet… for (determining the date of) Hajj. (2:189)

Aayat2:185,2:200 and 22:29 have no relevance for determining the Hajj date. The only correct date of Eid al-Adha all over the world is 10th Day of D. Hijja, counted from the evening D. Hijja Hilaal is seen.

(It is well-known that NONE of the committees in S. Arabia assigned to look for a Hilal ever see a crescent moon on the officially announced dates. It is always SEEN a day or two later there.)

Eid al-Adha is on the 10th day of Dhul-Hijja.

Eid al-Adha date, like Eid al-Fitr, is to be fixed by the crescent moon.

No Fiqh ever fixed Eid al-Adha date by the Hajj date in Makkah Mukarramah.

(The Messenger (SAW), Sahaaba and Tabi’in always prayed on the 10th D. Hijja by their sighting, irrespective of when was Hajj in Makka. The Ummah has been doing it on the 10th D.Hijja. NEVER BEFORE anyone fixed it on the ‘Day after Arafah in Makkah’. Similarly, the Messenger (SAW) always fasted on the 9th day of D. Hijja by the date in Medina (or wherever he was, as Ahadith mention it clearly, and not when the Day of Arafah was in Makkah.

Fixing Eid al-Adha date by Saudi-fixed Hajj date is a BID’AH as several prominent Fuqaha have declared. It is a ‘Bid’ah’ of the worst kind when it is certain that the Saudi date of Hajj is 8 of D.Hijja. Ulema accept that Saudi dates of Hajj cannot be based on the‘Ahilla’ of the Qur’an and Sunnah, and yet ISNA persist in its folly by arguing that Eid al-Adha is ‘Eid al-Hajj’.)

by: The Committee For Crescent Observation International

by: The Committee For Crescent Observation International

1978 MSA (now ISNA since 1980) created the serious problem of fixing Ramadan and Eidain dates for the Muslims in N. America. It replaced “Sighted moon in North America” criterion by its “News from a Muslim country” i.e. Saudi Arabia.

In 1979, Shawwal moon could not be seen anywhere in N. America a day after Saudis celebrated Eid, and Muslims in N. America followed Saudis on ISNA’s advice. In 1980 the same confusion was repeated.

1981:Under public pressure, ISNA organized a meeting in Chicago but the discussions were derailed as ISNA insisted that the real issue is Fiqh disagreement of “Ittihad vs. Ikhtilaf al-Matal’i”, and not erroneous sighting in Saudi Arabia. CFCO speakers at the conference, on the other hand, insisted that it is really a matter of “Hilal’s visibility” in Saudi Arabia and not “local vs. global sighting”. We clarified that “the whole world is “one Malt’a but in 24 hours”. Saudi announcements always contained the phrase: “Shuhud Udul in several places saw…” or “30-days of …completed”. CFCO analysis of visibility data at Makkah proved beyond doubt that the moon could never be visible there in the evening when it is claimed as sighted or the 30th day of the lunation. It took another five years before ISNA Fiq Council could accept Saudi mistakes

1986: IIIT (an ISNA institution) organized an international conference of ‘experts’. The papers presented at the conference are available as “Proceedings”. ISNA was forced to admit erroneous Saudi claims and changed its criterion again to “Visible moon in N. America for Ramadan and Eid al-Fitr”. For Eid al-Adha, it insisted on following Saudi official dates of Hajj even when proven wrong. However it did not change the chaotic date-fixing. Faulty and sometimes bogus claims of sightings within N. America plague the Muslim community year after year. CFCO’s fact-sheets provided enough evidence to force ISNA a retraction on several occasions.

1999: ISNA Fiqh Council agreed that the Qur’an, Ahadith and Fiqh do not support its “celebrating Eid al-Adha next day of Hajj”, and decided to uniformly apply “Sighted Hilal in N. America” for all months including Ramadan and Eidain.

2001: Dr. Jamal Badawi and a few other members, without any support from the Qur’an and the Sunnah, insisted that ISNA Fiqh Council made a mistake in 1999 by abrogating its Eid al-Adha ruling. They forced ISNA Fiqh Council to go back to “Eid al-Adha the day after Saudi Hajj date” – a criterion they admitted has NO SOUND BASIS. Here is ISNA’s explanation:

The Fiqh Council’s recommendation was contingent on educating the Muslim community prior to Eid … This did not materialize. Due to the unfamiliarity with this information prior to Eidul Adha, heated discussions and lesser unity occurred in several communities, contrary to what was hoped.

There is room in Islamic Fiqh to adopt a weaker, but still acceptable opinion if that achieves greater benefit (maslaha); in that case greater unity. Therefore, the Fiqh Council recommends the restoration of the previous method of… Eidul Adha to follow the announcement in Makkah about… Dhul Hijjah.

The present chaos may easily be traced to ISNA’s ‘experts’. The two have hardly ever looked for the moon or arranged a moon-watch. However, because of their refusal to acknowledge well-established astronomical and observational facts both accept wild claims as they did for Eid al-Fitr 1426 on Nov. 2, 2005

Hilal’s visibility as Dr. Doggett puts it depends not only on moon’s age but also moon’s angle, altitude, differences between the azimuths of the sun and moon at sunset, brightness of sky after sunset and experience of observer. 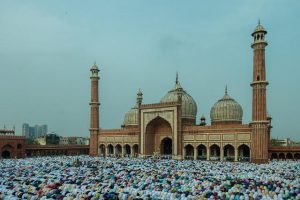